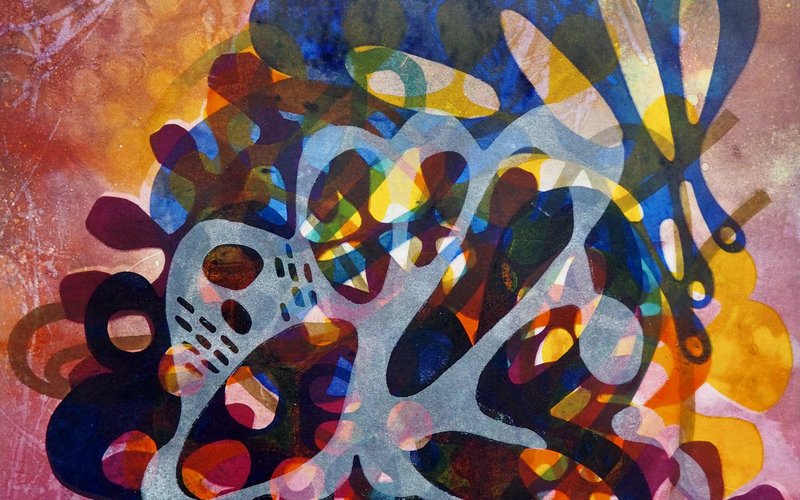 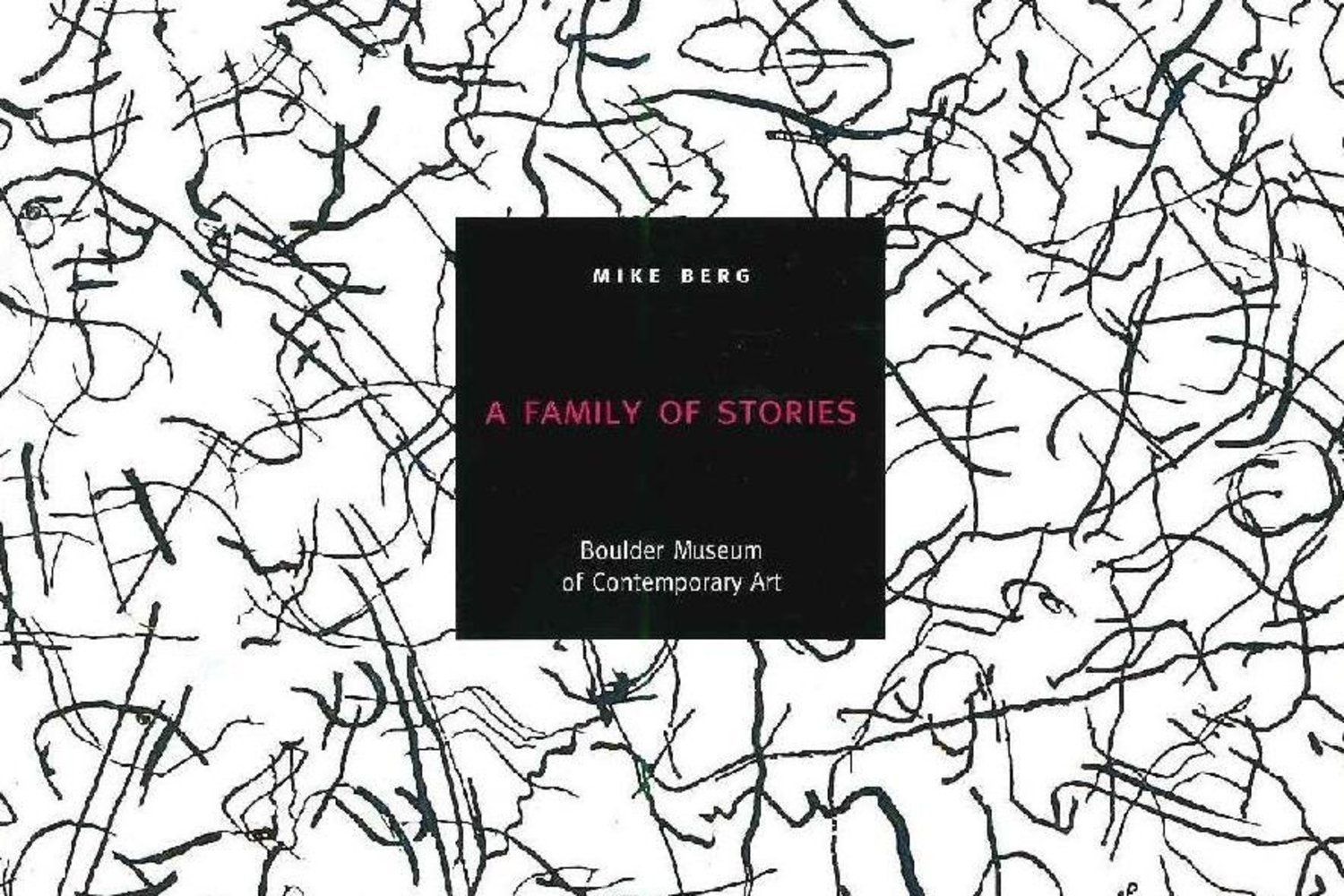 “Mike Berg is an artist I’ve since come to appreciate as a kind of aesthetic anarchist, disrupting the natural processes of decay and organizing his interventions into exquisitely layered abstraction. He has a tendency to blur most of the distinctions between the fine and the decorative arts, and I like him for it. What he can’t paint, he’ll sew. Where he can’t scrape, he’ll bleach. Where no art has yet been, he’ll go.

Berg paints on wood, linen, paper, glass, and metal, much of which does not reflect the downy skin of youth but the wizened hide of lived experience. On these bleached, corroded, peeling planes — which he washes in beautiful, diaphanous pigments — Berg staggers elegant columns of rosettes inspired by ancient Islamic textiles. Borrowing and synthesizing elements from opposing cultures is not an unusual practice in the post-modern world, but Berg does it with a notable absence of ego and a minimum of fuss. Not for him the trendy issues of the day—popular culture, the media, adolescent psychology, bodily functions — his motives are pure and so is his feeling for line. It’s marvelous.

The museum is located next to a ceremonial teahouse from Central Asian Republic of Tajikistan. The teahouse, given to the City of Boulder by the people of Tajikistan, is the first and only such structure ever to be placed outside of the former Soviet Union. Berg received the commission to produce a mural based on its decorative themes. This was an inspired match: Tajikistan’s largely Sunni Muslim population originally descends from Persia and is known for its textile and carpet designs, Berg’s favorite. He eagerly rose to the occasion, beginning the work, a kind of cultural handshake, in his usual way: with a basic grid, multiplied into square blocks. Into these he also absorbed the wall’s surface irregularities as well as the museum’s existing architecture, and incorporated each into his overall design. He stenciled several sets of overlapping grids onto the wall, further overlapping some of these with sections of a floral motif appropriated from the teahouse. The arched outlines of its windows he also made visible among the grids, alternating them with the teahouse patterns and the museum’s own windows and fire escape. He then borrowed the mural’s title from the modernist New York School poet John Ashbery, whose phrase aptly suggests how best to let the eye drink in this fantastic visual brew. Its ideas not only exist here in harmony but with a delicacy that’s amazing for a work of such large scale — roughly one hundred fifteen feet by thirty.

The tapestry-like canvas he calls The Direction of Prayer is organized on the same stringent principles, but with even more fluid results. The painting’s ornamental figures come from decorative details Berg saw in a 16th-century Persian rug, to which he added a few painterly marks of his own, namely footprints (why not? it’s a carpet!), and his usual finely latticed grid. The work does look like a carpet, but probably not one any Persian would take to market — it’s too subtle. You have to get very close to notice the textural nuances, the shifts in color, the depth of its many layers, each of them thinned to transparency. Like the mural in Boulder, it’s a work that encourages intimacy with the viewer, which is telling: Berg does not want to be out there all alone.

Intimacy is a quality that also attends his recent, laser-cut copper works, From an Early Age and Like Jazz Music. Both are schematic abstractions that float, in ghostly suspension, within their patinaed bronze frames. They exhibit crucial differences: Like Jazz Music is a free-form composition whose copper retains its natural patina; From an Early Age is an interrupted grid of silvered copper. Both signal Berg’s departure from Islamic source material and a leap into the pool of his own vision, but Like Jazz Music is yet something else again. The image, which appears an untamed pattern of copper twigs connected by vaporous rods, is actually a multiple struck from a single pattern of squiggly lines. The piece has the musical rhythms of Berg’s previous work but in this case, as its title indicates, the figures are improvised and gestural rather than formalist and architectural. For my money, it represents a giant step forward in the artist’s career, though it also flows back to his roots in figuration.

The copper pieces reveal something else, too. Owing partly to the tensile nature of the material, these works have a palpable, other presence, an immanence new to Berg’s drawing — and these are very much drawings. Despite their intrinsically sculptural values, they also have a strange immateriality. Thus, they look like the puzzles they are: objects that are obviously inert and yet seem quite alive; it’s an interesting contradiction, he sort of mystery that occurs in all the best art. Even more interesting, Berg loses neither mystery nor intimacy by transferring Like Jazz Music to monumental scale, which is what he has done for another commission: fabricated the same image into a copper structure many times its original size for the façade of a 17th-century stone castle in Austria. There, it gives the impression of a system of primitive, clinging vines.

Neglect is a terrible thing: people die from it; things fall apart. Yet there’s beauty in ruin as well as disgust, and a history worth repeating. This is what engages Mike Berg in his art, the strategy at the core of his practice: restatement, ornamentation, renewal. All history, I’m convinced, bears some relation to our lives, because of what we do to survive it: the stories we tell, the heroes we make, the pictures we draw to its memory — the stuff we call art."

— Excerpt written by Lind Yablonsky, New York, February 1998, from the A Family of Stories catalog