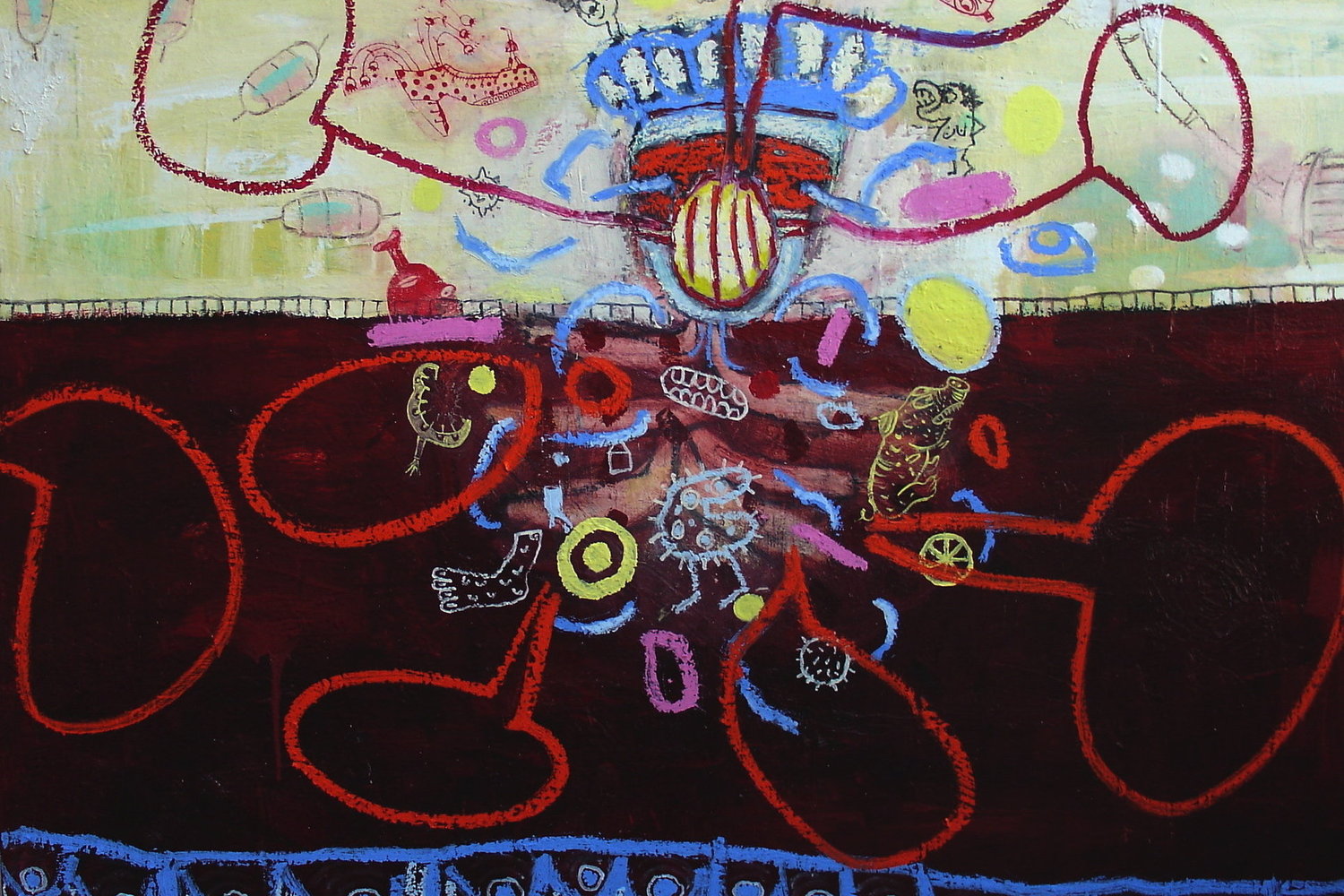 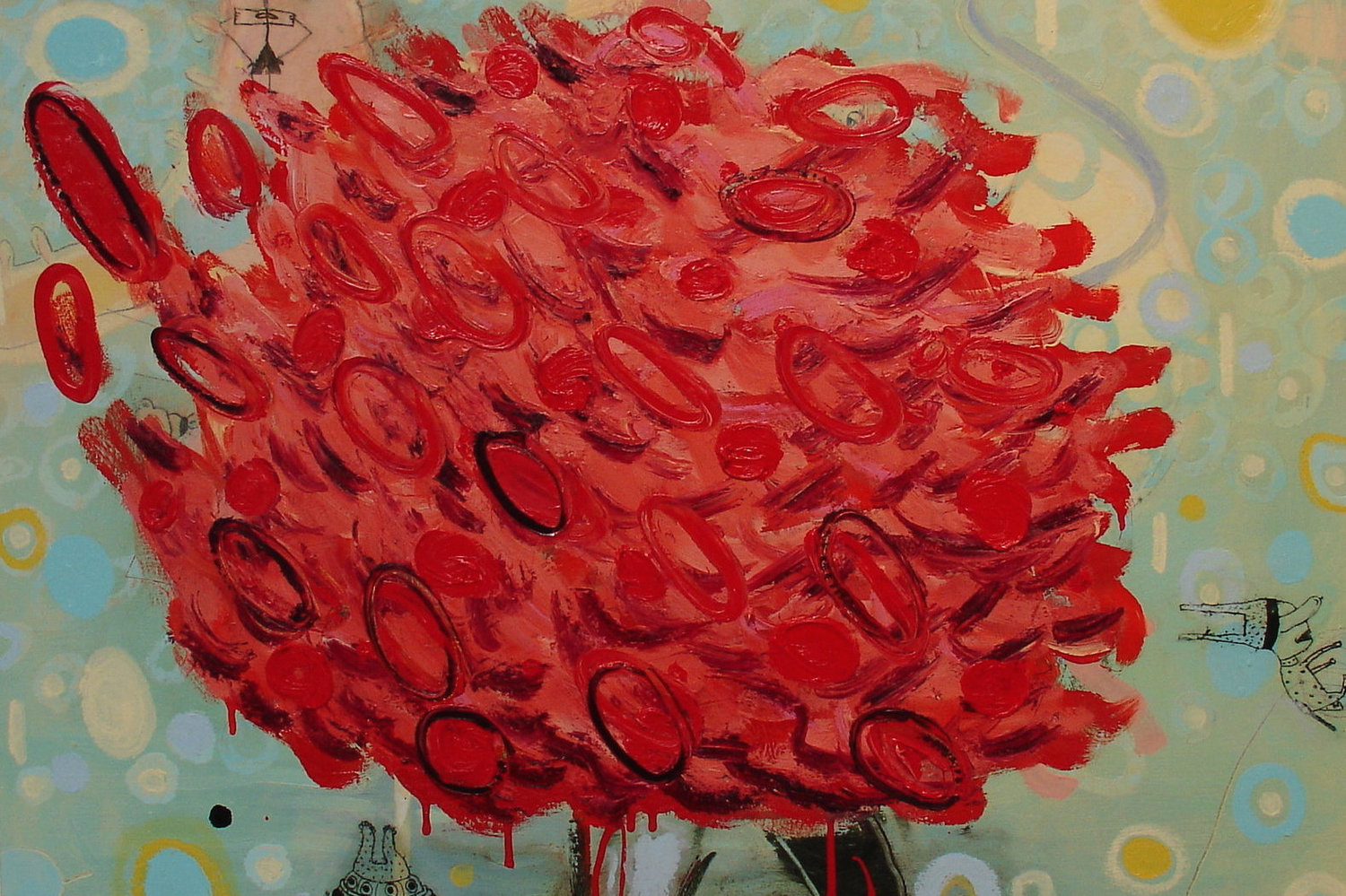 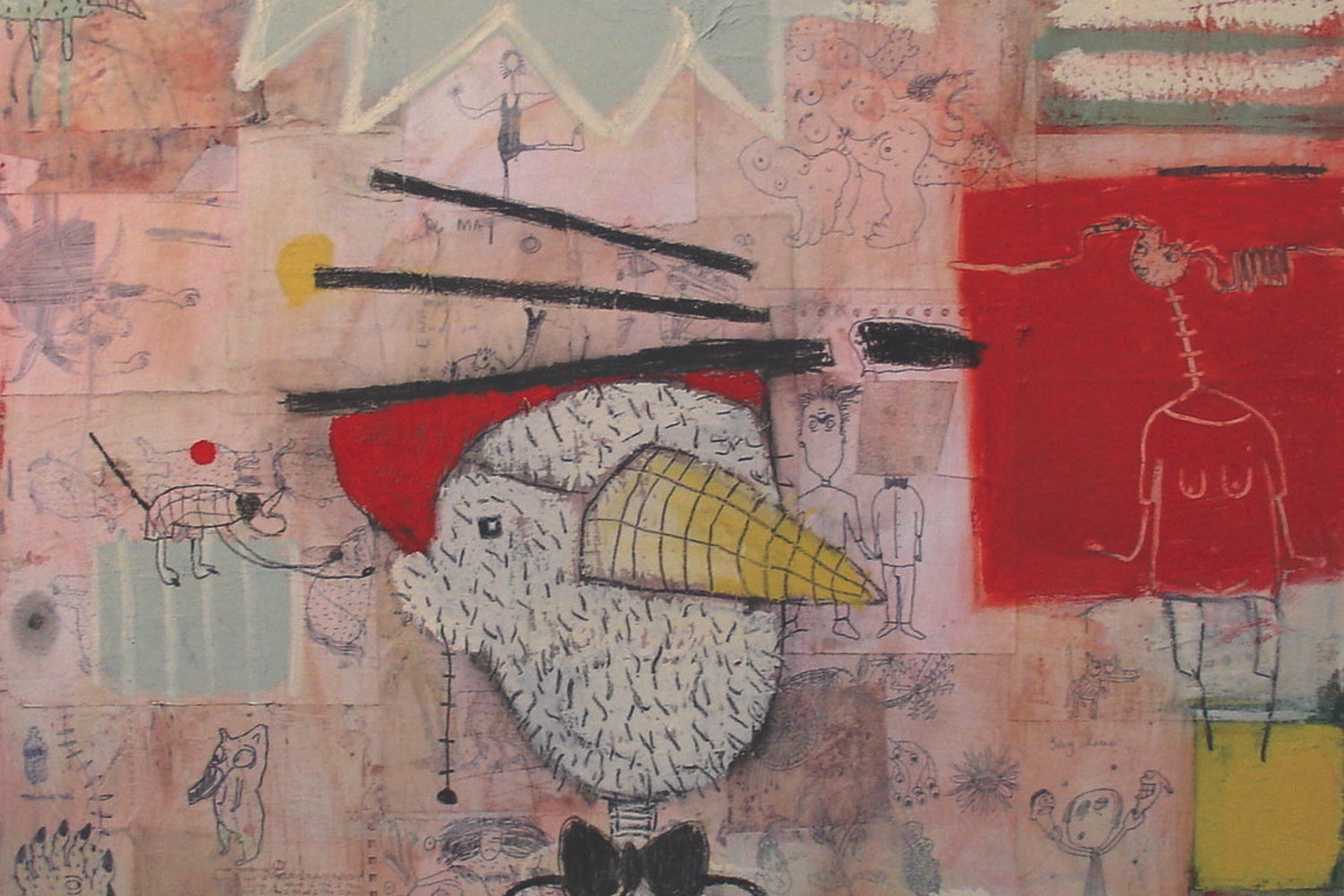 The Surface and Beneath brings together two bodies of works, carnival folk art from the last century, and recent paintings by Heather Wilcoxon. On first view, what they seem to share is simply the appearance of whimsical work intended to amuse or entertain. Closer inspection reveals similarities that are not only aesthetic. All art holds embedded stories of particular times, places, and cultural conditions, and the works in this exhibit foretell messages both cogent and urgent about their respective milieus. Beneath the beautiful scratched, and stippled surfaces of each of these playful works lays a wealth of information about the popular culture of the times.

The carnival folk arts are part of a private collection. The owners’ long appreciation of abstract expressionism drew them to these works because the raw and heavily painted surface treatment reminded them of favorite paintings by Jackson Pollock and Jasper Johns. While made for amusement, they offer insights into the specific culture of carnivals during the early and middle part of the 20th century. Imagery is both non-objective and representational. There are interesting and eye dazzling

shapes, barnyard as well as jungle animals, clowns and portrayals of those with specific and often exaggerated racial and ethnic characteristics; all fabricated to be hit or knocked down. While emblematic of family fun, carnivals had a darker side and were often run by or frequented by those on the fringes of society. Here a kind of morbid fascination implicit in the torment of animals, figures of authority, or particular outsider groups could be played out under the guise of gamesmanship. If viewed as precursors to popular current video games we recognize the still ubiquitous attraction to violence, but thankfully the more sinister target images that prejudicially assailed outsiders and the disenfranchised have fallen out of favor and remain as folk art relics of the past.

Heather Wilcoxon’s paintings lie in the intersection between folk art, outsider art and expressionism. They draw on elements of mark making, graffiti art and cartooning and bring to mind works by Cy Twombly, Jean Dubuffet, Kenny Sharf, and Jean Michel Basquiat. Masterful built up surfaces become the ground for cartoon like figures, but beneath the childlike appearance and whimsy is a mature and thoughtful body of work whose implicit message is specific to the times and targets the artist’s concerns about the contemporary human condition. Her work chronicles her view of misguided politics, greed, narcissism, power mongering, the military industrial complex, and the destruction of our planet. And yet her cynicism is mediated by a strong sense of hopefulness and faith in human nature.

Wilcoxon lives and works in Sausalito, California. She received her BFA and MFA from the San Francisco Art Institute. She is the recipient of two Pollock/Krasner Foundation Grants and has been exhibited and collected widely. Her houseboat, the Delta Queen, and intricately adorned car are the manifestations of a life of relative simplicity lived consciously and with an eye always open to aesthetics.