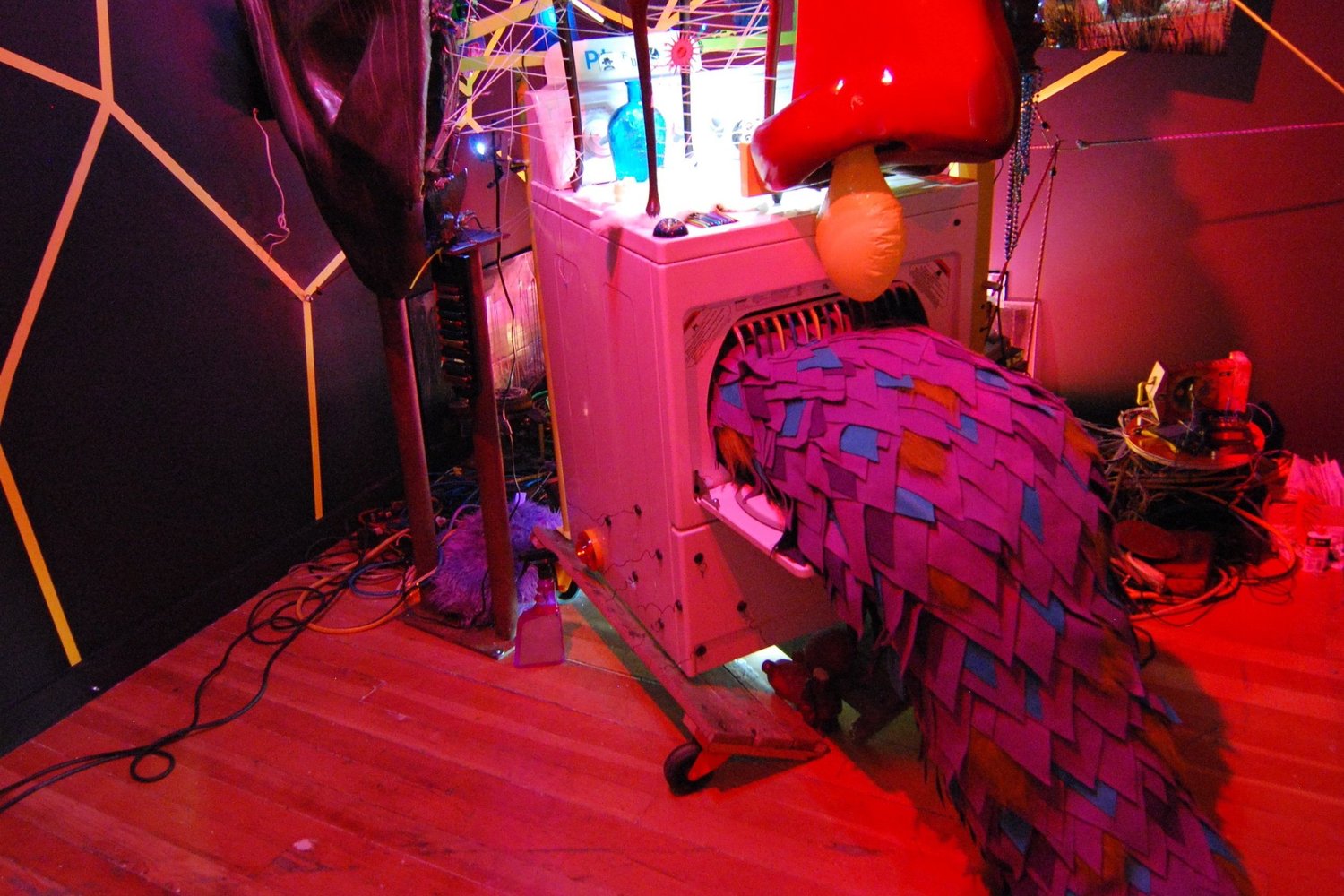 Approaching BMoCA’s Union Works Gallery, visitors are transported to another place and time as they enter the environment created by Boulder artists Donald Fodness and Alvin Gregorio. Integrating the museum’s architectural structure and interior layout, they have assembled re-mixed sound and video projection, found objects, drawing, sculpture, and mural painting into a multi-sensory experience. As a central feature, two monumental heads, each accompanied by a signpost, face each other in conversation. One of these large-scale sculptures is also a comfortable meditation chamber that can be physically entered and serves as a protective, quiet place. The other is a complex design of collected knick-knacks, appliances, and kinetic elements, densely combined in a patchwork of private symbolism.

Through this construct of repurposed materials, infused with references to urban street culture, comic aesthetics, and other popular sources, Fodness and Gregorio comment on the way contemporary life is influenced and shaped by multi-layered, sometimes accidentally collected pieces of information. Brimming with allusions to childhood memories, familial trauma, and personal histories, their installation becomes a gateway for self-reflection.

Shut Your Face Off! is an invitation to contemplate how we navigate the ever-increasing exposure to stimuli and interactions made possible by new technologies. How do we balance the mediated realities of chat rooms, role playing games, and social networks with our understanding of ourselves as authentic individuals? And as such, are we free to overcome our predetermined destinies by choosing our own realities and paths in life? While the artists address these questions in a light-hearted, playful way, interspersed with a healthy dose of humor, the execution of their intellectual investigation reflects a finely tuned combination of skill and imagination.

From the time they discovered the multitude of overlapping influences, experiences, and interests, Donald Fodness and Alvin Gregorio have cultivated their collaborative work as a vital source for new ideas that can take them in unpredictable directions. They have fostered a sense of kinship that culminates in the personae they conceived as an extension to their exhibition at BMoCA—The Flying O.H.N.O. Twins. Their adventures can be followed on facebook.com/o.h.n.o.twins.

Donald Fodness was born in 1979 in Kennith, Minnesota. He recently graduated with an MFA from the University of Colorado, Boulder and holds a BA in the History of Art from the University of Illinois, Urbana-Champaign. He is an instructor at the Rocky Mountain College of Art+Design, Denver and at the University of Colorado, Boulder. His work was shown as part of Objectophilia during the Biennial of the Americas in Denver (2010) and in Xiao Shan Xiao, a group exhibition at the Hunan Province Art Museum in Kaifeng, China (2010).

Alvin Gregorio was born in 1974 in Los Angeles, California to immigrant parents from the Philippines. He holds an MFA from Claremont Graduate University, Los Angeles, California and a BFA from California State University, Fullerton. He is assistant professor of painting at the University of Colorado, Boulder and was a visiting artist at Anderson Ranch Arts Center in Snowmass, Colorado. He was recently included in VERSO MANILA-Contemporary Filipino Artists in Turin, Verso Arte Contemporanea, Turin, Italy (2010) and was featured at the China International Gallery Exhibition in Beijing, China (2009).