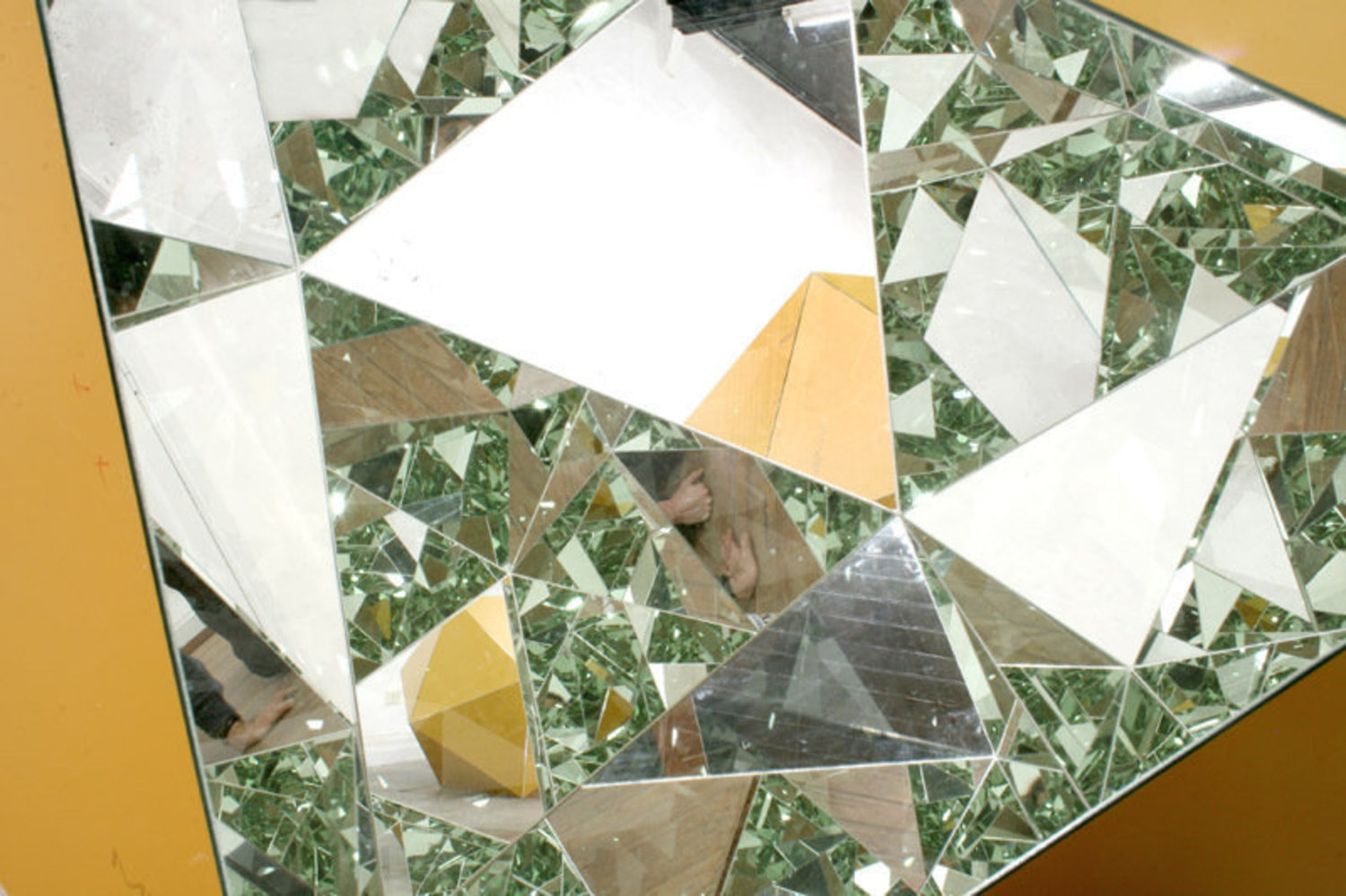 “What we call birth is the beginning of a difference.”
- from Ovid’s Metamorphoses, The Teachings of Pythagoras

In January of 2011, BMoCA invited four artists—Gustavo Artigas, Chris Coleman, Laleh Mehran and Seth Wulsin—to complete residencies in Boulder in order to create works that give visual representation to local residents’ experiences of diversity. In response to this creative challenge, the artists have developed projects that will be exhibited at BMoCA this summer in BIODOME: An Experiment in Diversity.

Seth Wulsin’s installation Wishing Well, consisting of two spheres made from twenty equal-sided triangles, extends an invitation to consider individual differences rather than statistically measurable aspects as a key ingredient for diversity. Two icosahedra – twenty-sided spheres – made from mirror, glass, and silicone stand in sleek angularity that merges their inherent fragility with structural strength. Installed with the mirrored side facing inward, their gleaming interiors are revealed through glass-faced panes and small gaps as viewers move around the freestanding sculptures. Light and reflections enter and pass through the spheres at the speed of light and continue into infinity due to their geometric attributes, yet remain contained within their outer boundaries.

Viewers will be able to catch a glimpse of numerous fragmented and constantly changing images of themselves, as their reflections pass through, multiply, and leave traces that accumulate in these intangible spaces like memories. In this way, the sculptures become vessels that hold the essence of everyone that happens upon them.

Wulsin’s installation is steeped in philosophy, mythology, geometric symbolism, and folklore. According to the ancient Greek philosopher Plato, the icosahedron was the symbol for the element of water. Water as a source of life, has traditionally been assigned transformational and healing powers. This inspired the belief that wells hold the power to grant wishes. Wishing Well at BMoCA is a place where we can come and speak our wishes, leaving with renewed hope that they will be granted.

Seth Wulsin was born in 1981 in Spring Valley, New York. He studied Drawing and Painting at Parsons The New School for Design in New York City. He also briefly studied Literature and Philosophy at Yale University, New Haven, Connecticut, and Religion and Politics at Brown University, Providence, Rhode Island. Between 2005 and 2009, he lived and worked in Buenos Aires, Argentina. Since 2009, Wulsin divides his time between Bogotá, Colombia and Brooklyn, New York. He is a member of the art collectives Artistas en Latinoamerica, and Wubacawi, and he is currently a studio fellow at Smack Mellon, New York. Wulsin’s work has been exhibited in group and solo exhibitions at DUMBO Arts Festival 2010, Brooklyn, NY; ArteBA 2010, Buenos Aires, Argentina; and at Casa Tres Patios, Medellín, Colombia (2008).