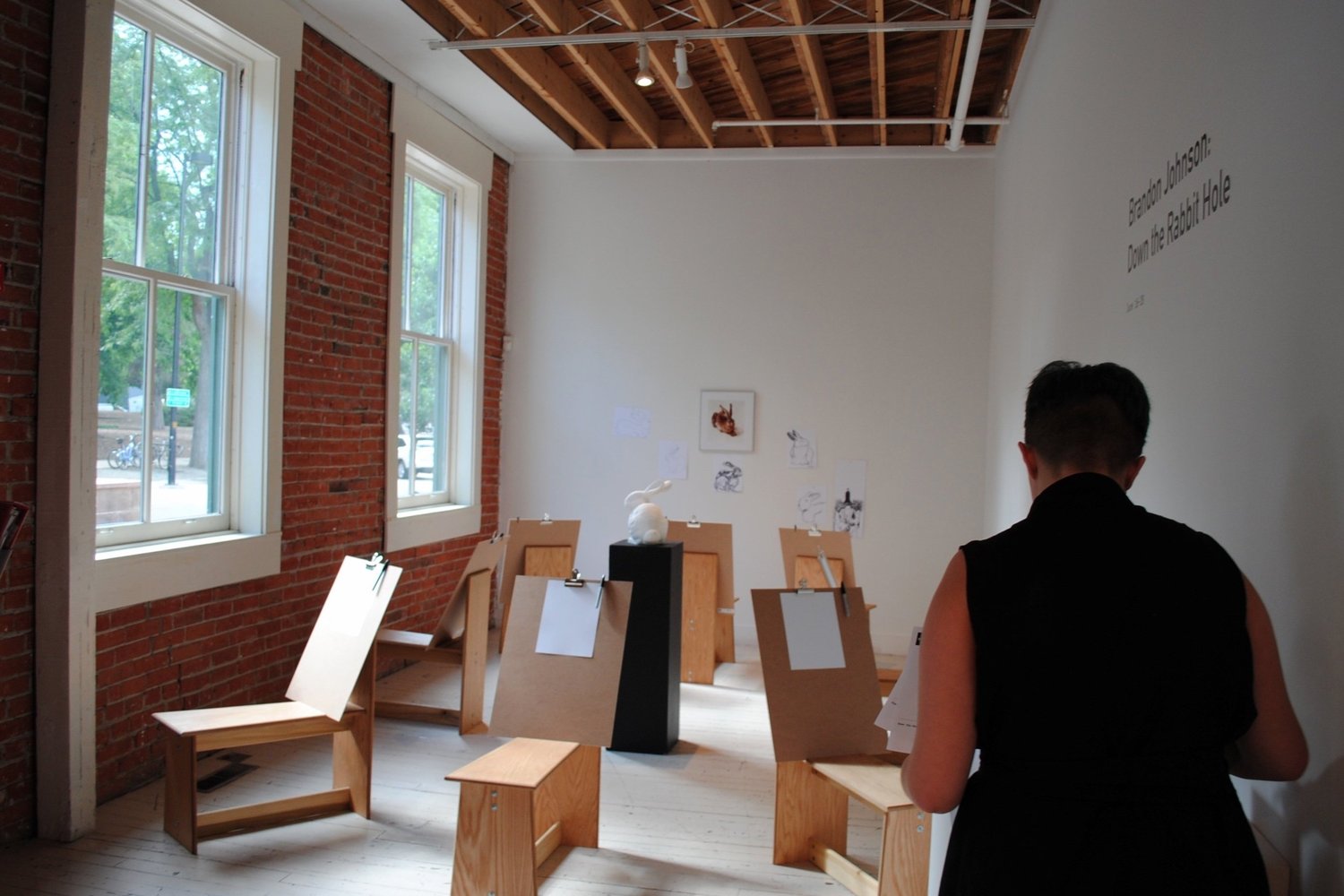 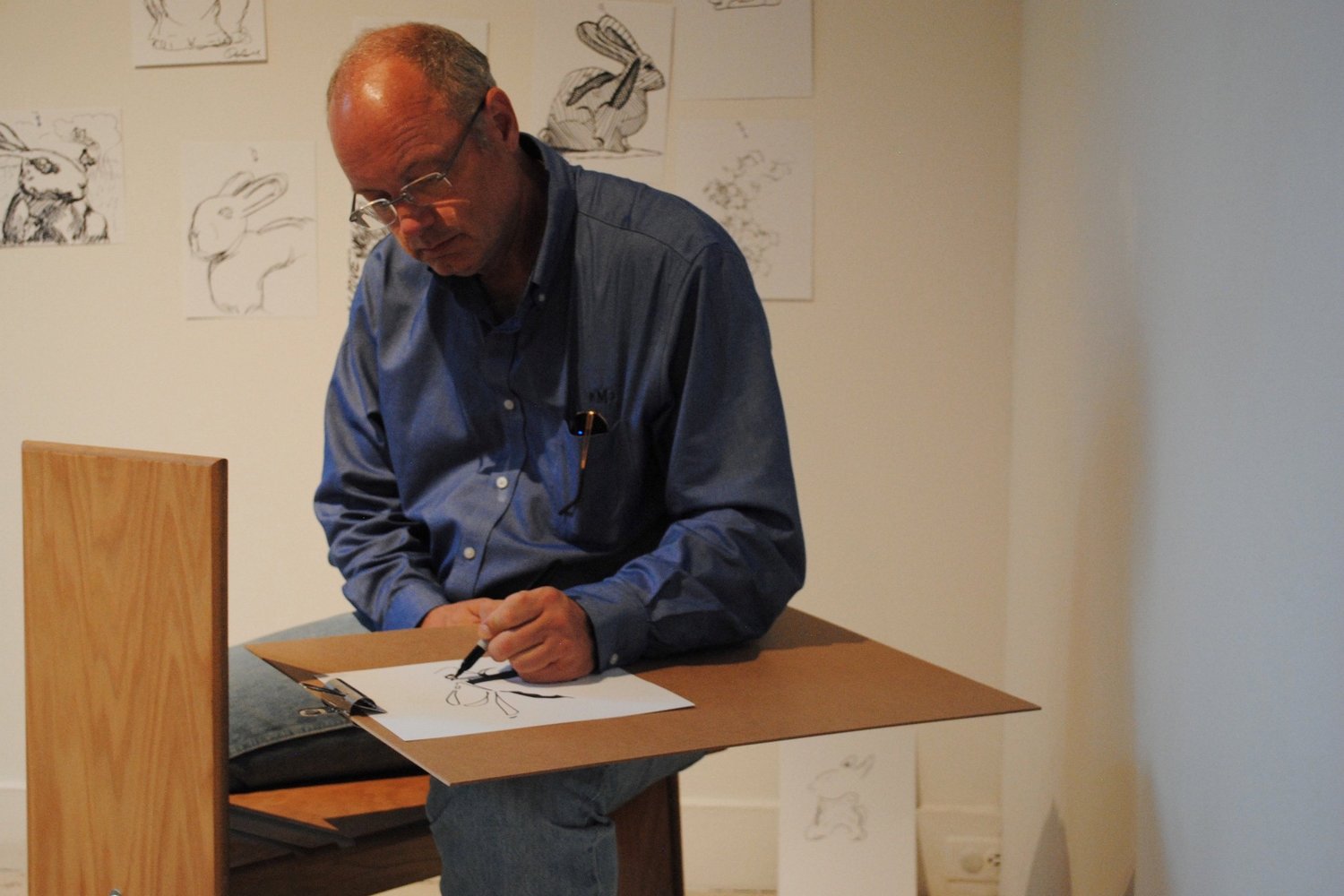 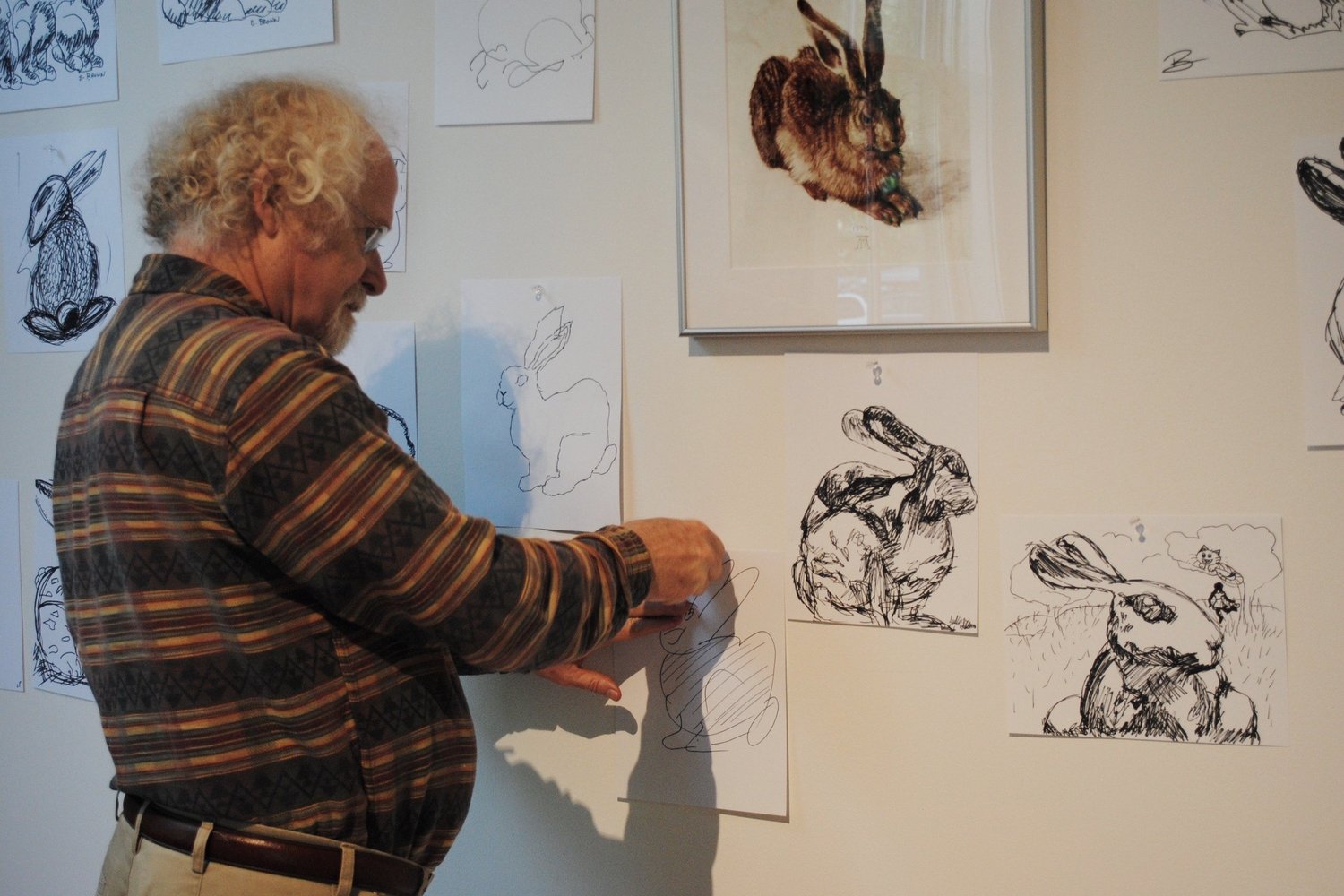 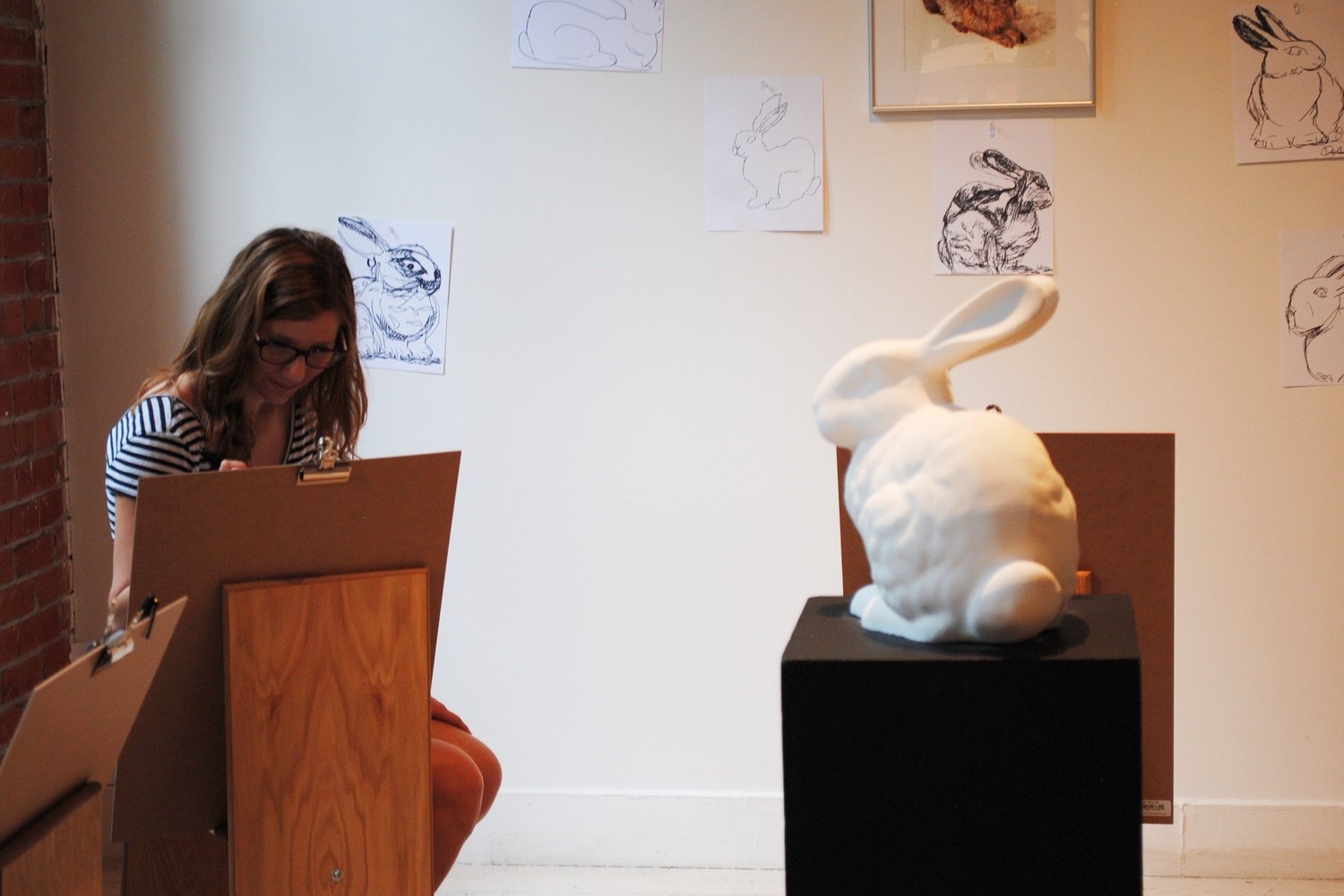 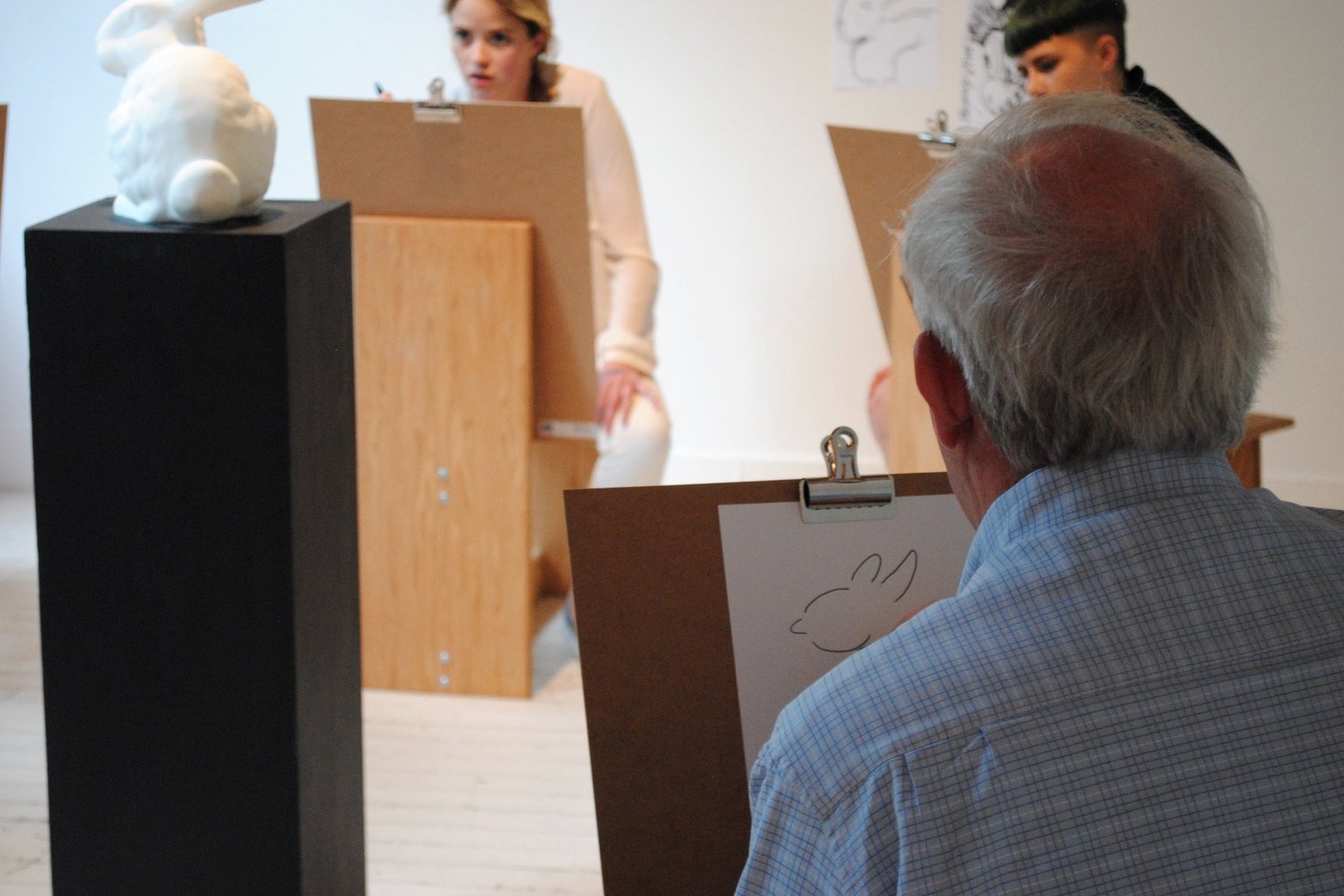 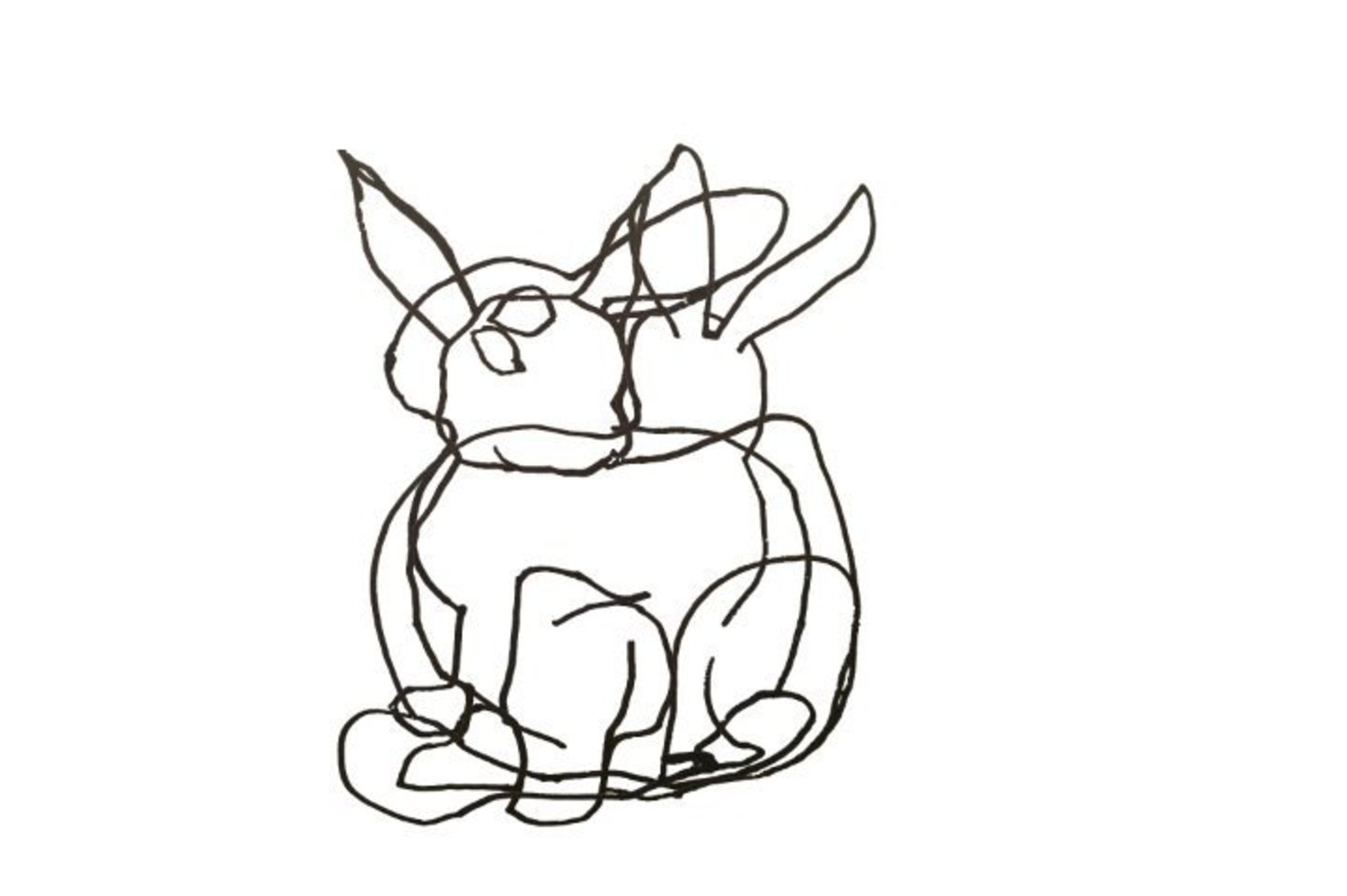 Curated by Brandon Johnson, this interactive exhibition encourages visitors to participate in a drawing experiment by creating portraits of a 3D-printed version of the Stanford Bunny—an iconic computer graphics model. Participants thus contribute their own perspectives to the long tradition of depicting rabbits in the arts and investigate what happens when a complex, computer-generated composite image is rendered by hand.

Down the Rabbit Hole explores the rabbit and hare as common motifs and potent symbols in mythology and the visual arts—representing love, lust, fertility, purity, rebirth, and resurrection. In his 1965 action How to Explain Pictures to a Dead Hare, artist Joseph Beuys viewed the hare as “a symbol of incarnation, which the hare enacts—something a human can only imagine.” Albrecht Dürer’s Young Hare (1502), one of the most famed depictions of an animal in the history of European art, exemplifies a desire to achieve the highest degree of precision and realistic representation by hand. This image has been reproduced and artistically reinterpreted by numerous contemporary artists. In popular culture, the rabbit appeared in human form in Lewis Carroll’s 1865 novel Alice’s Adventures in Wonderland. The term “down the rabbit hole” stems from this novel and serves as a metaphor for entry into the unknown, disorienting, or mentally altering. American rock band Jefferson Airplane expanded upon this metaphor in their 1967 song “White Rabbit.”

The Stanford Bunny is an iconic computer graphics model developed by Greg Turk and Marc Levoy at Stanford University in 1994. This model has been used as a standard for testing and demonstration in the field ever since. The Stanford Bunny was created through the technique of range scanning, a process involving multiple, even hundreds, of scans from many different directions to obtain sufficient information to merge into a composite model. Once in the digital plane, the model can be manipulated and altered at will.

For this Present Box exhibition, a 3D-printed version of the Stanford Bunny will be on view atop a pedestal surrounded by drawing stools. Visitors are invited to create their own portraits of the bunny using provided materials. Dürer’s pinnacle of representation is not the expectation. Instead, their own hand should be allowed to determine the composition. By capturing a variety of unique perspectives, this drawing process mimics the range scanning from which the original Stanford Bunny model was derived. But what happens when scanning is done through the human brain and body, rather than by machine? We return to the role of interpretation in human perception and creation—sending the Stanford Bunny “down the rabbit hole” of the mind. Drawings will be pinned to the wall alongside a reproduction of Dürer’s Young Hare to demonstrate the inherent variation of the work produced. At the conclusion of the exhibition, all drawings will be scanned and layered through feature-based image registration into a single composite 2D image and made available as a free crowd-sourced edition—the newest incarnation of this mythical creature.