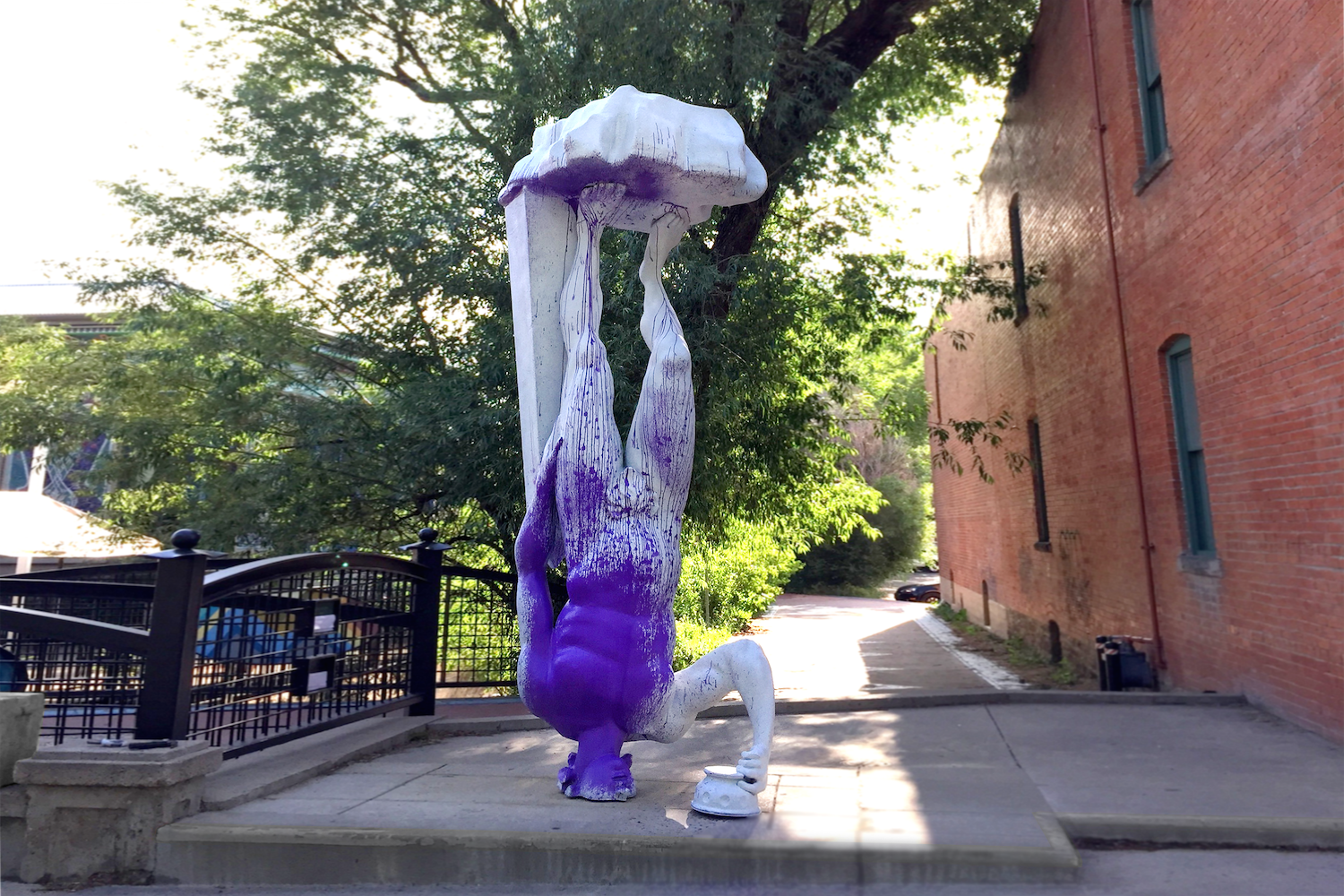 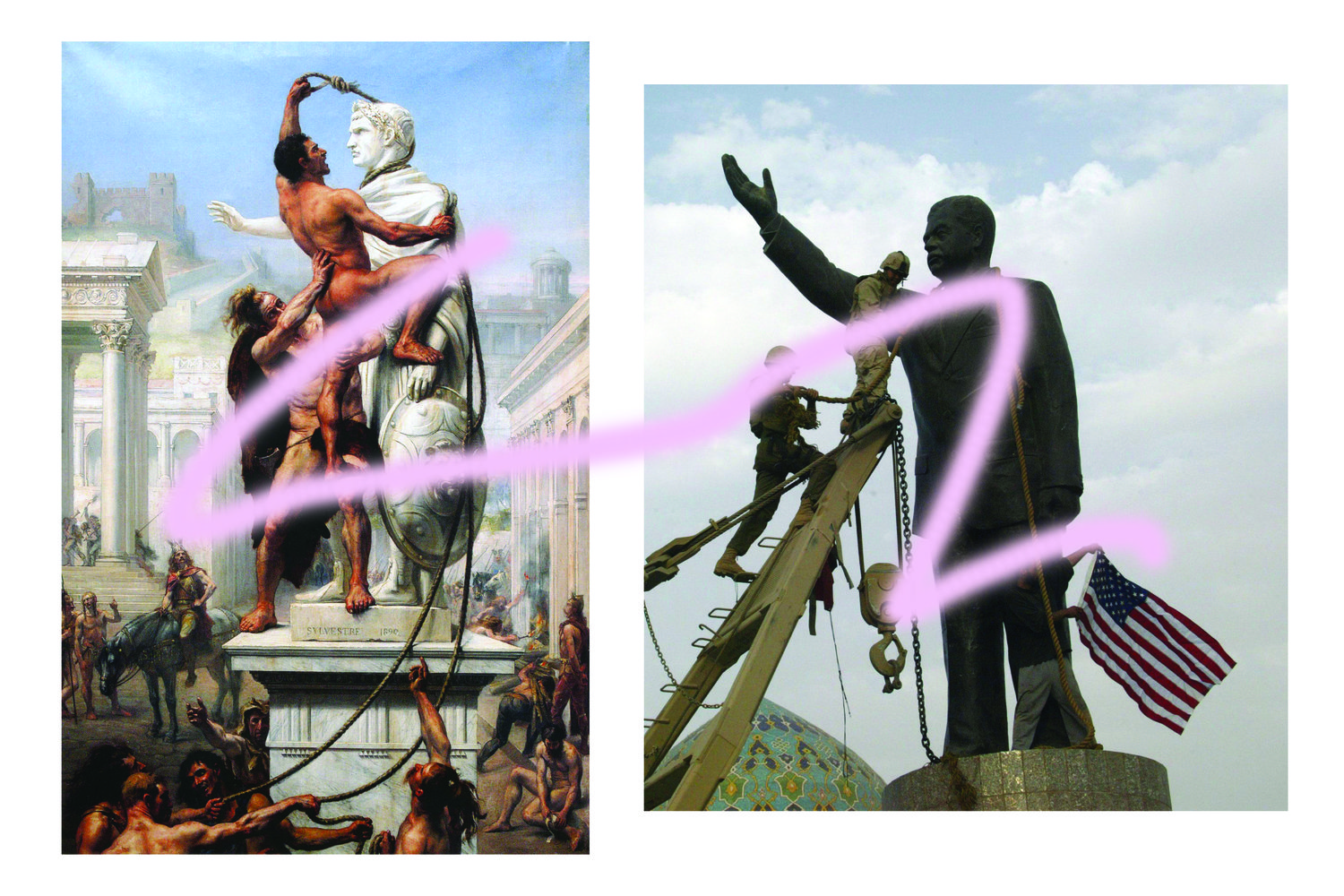 The inaugural BMoCA InsideOut, a sculpture by Dmitri Obergfell titled Go Home Bacchus (2016), marks the first new work of art on the site in more than a decade. For his project, Obergfell has created a 12-foot tall statue of the Greco-Roman god Bacchus, turned on its head and smattered it with paint. The work reflects on the complexities and histories of two forms of public communication, monuments and vandalism, and demonstrates how they have come together to establish a reflexive public discourse and aesthetic.

Monuments memorialize an idealized interpretation of a person, place, or event that has affected the trajectory of history. Generally constructed for permanence and representative of complex narratives, monuments can be oversimplified and dogmatic. As a result of monuments’ irrefutable nature, they are unable to adapt to changing socio-political landscapes and risk becoming symbols of outdated beliefs. Evidence of such can be seen in the toppling of Lenin statues after the 2014 Ukraine revolution, or the dismantling of the statue of Saddam Hussain by American forces during the 2003 invasion of Iraq, or the destruction of King Louis XV monuments in 18th-century Paris during the French Revolution. Such iconoclasm has occurred since the beginning of civilization. The highly visible and symbolic nature of monuments makes them magnets for vandalism. Vandalism is regarded as illegal activity, and, at the same time, as anonymous communication by the public. Vandalized monuments can be read as weathervanes of political currents, and fallen monuments can mark historic change.

Dmitri Obergfell: Go Home Bacchus is a commission by Boulder Museum of Contemporary Art in partnership with Rocky Mountain College of Art + Design.

BMoCA InsideOut
Launched in 2016, BMoCA InsideOut is a new exhibition platform located on the northwest corner outside of BMoCA. A site for temporary artistic intervention and public discourse, BMoCA InsideOut will feature rotating commissions from local and international artists who push the boundaries of public art. The temporary installations will enliven the Civic Area by sparking dialog between the community, artist, and museum about art and topics relevant to today. BMoCA’s curators select each commission for BMoCA InsideOut, which is an extension of the museum’s exhibition program. BMoCA InsideOut aims to generate responsible criticism, foster active public discourse, and pique the community’s interest in the evolving field of contemporary art. Each commission will be different from the next, the only constant will be the temporary nature of each project.

The space has been host since 2003 to a wooden sculpture by Jerry Wingren, which will be returned to the artist when the new piece is installed.

Dmitri Obergfell (b. 1986) earned his BFA in Photography/Video Art from the Rocky Mountain College of Art + Design in 2010. Obergfell is an artist whose work explores currents that flow through historical, political, and philosophical narratives. Appropriating symbols and objects across history and cultural backgrounds, his works reconstitute their meaning to describe contemporary ideological constructs.

Obergfell’s works have been recently included in Thief Among Thieves at the Museum of Contemporary Art Denver (2015), CAFÉ Flesh at Parallel Vienna (2015) and Back to the Future at Casa Maauad (Mexico City). Solo exhibitions of note include Yinfinity at Gildar Gallery (2015) and Visigoths (2013) at Upp Contemporary in Venice, Italy. He has previously exhibited at the Torrance Art Museum, Torrance, California (2014), the Parco Foundation in Treviso Italy (2013), and the Futura Centre for Contemporary Art, Prague, Czech Republic (2012), among other venues. Obergfell is currently a resident artist at RedLine Denver.